We only have limited stock. Get it while you can.

There are moments in magic that everyone remembers. Visual Matrix (The Rose Act) on AGT was one of those moments. So elegant. So visual. So…magical. It almost broke the internet when it hit YouTube. Now, it’s had over 300 million views. That’s more than every magic act over the last twelve years of America’s Got Talent. Combined.

Now, finally, you can own this miracle.

With anything like this, you know there are going to be horrible pirated versions where people guessed the methodology and sold trash. People paid thousands of dollars for these counterfeits and couldn’t even get them to work. And that’s because Will Tsai never released the true workings. Sure, we all knew there was some black art, there was some kind of very clever surface. But the details were unknown. Until now.

Frustrated by seeing so many of his supporters and fans being taken for a ride by these pirates, Will has finally decided to share the inner workings, the details, the everything with you. And he is doing it at cost price. You won’t be paying thousands of bucks for this. And you will get the real deal.

Sans Minds are bringing this to market, but there is no arts and crafts and nothing at all to make. It comes fully assembled and ready to go. It looks incredible on camera and can be performed live as well so long as your audience is a small distance away (think Cabaret setting).

It is a very limited release and will not be made available forever. If you’re interested you need to act now. There is not enough being made for everyone. And, to be honest, this isn’t a release for everyone.

This is not just another trick. It’s a full act. Every nuance, detail, and wrinkle already worked out.

This one-piece earned forty million views in just forty hours. And you can now perform it.

One important thing to note is this is a purely mechanical device. And it comes fully assembled. There are no footswitches, and no electricity is needed. It’s a self-contained piece.

Customer Reviews
4.0 out of 5
2 reviews
5 stars 0
4 stars 2
3 stars 0
2 stars 0
1 star 0
Add a review
Hmm...you don't seem to have purchased this product yet to be able to leave a review.
You have already reviewed this product. If you would like to edit your existing review then please contact us directly.
Something went wrong! Please try again!
Sort: Most Recent Most Recent Highest Rating Lowest Rating With Photos Most Helpful 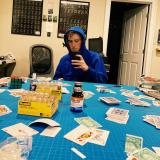 William T.
Nov 27, 2020
Great fun to use and post on video. Don't expect to pull this off in real life unless you have complete control of the situation
0
L
Liam C. Verified Buyer
Nov 9, 2020
bruhhhh! this is awesome! ive been waiting for this!!! not exactly what it seems tho.
0
Load more